Check out this great example of cyclura nesting and an egg-laying box that works well for juvenile Rock Iguana females. 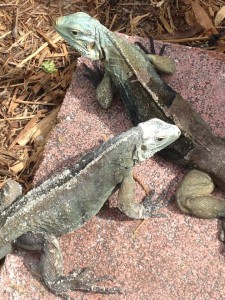 This couple of high blue Cyclura lewisi hybrid juveniles belong to Manny Hernandez. The couple is 3 years old and after mating the female named Theia started exhibiting nesting and gravid behavior. Manny made a sand box for her and she accepted it for her egg-laying needs. 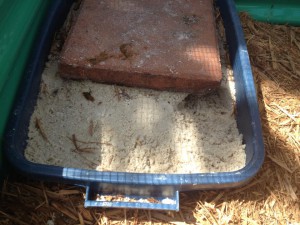 To make a sand box he used a large plastic container and filled it with sand. Since these Rock Iguanas live outside in Florida where the climate is warm and humid, the box didn’t need any additional heating or humidity. Large stone block on the top gives the female something to dig underneath. It’s more of an instinct and gives them the sense of security. It usually takes a few days for a cyclura to dig up her nest and feel comfortable in the surrounding environment. So as  few days passed Manny had noticed the progress and the signs of digging. 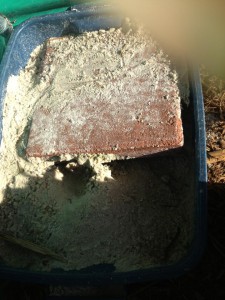 The female also had been rearranging the entrance to her nest and  spending the whole day digging. It’s her first clutch so inexperience may be playing into this. 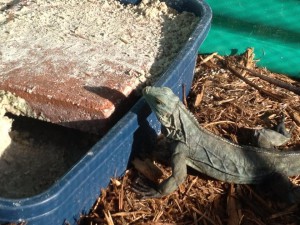 So finally after a few days of non-stop digging and arranging the sand she came out looking all thin and skinny. Which is the sign that eggs had been laid. 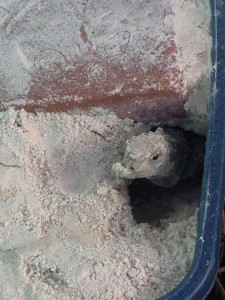 Theia, Cyclura poking her snout out covered with sand after laying her eggs

Manny Hernandez describes, “Well Theia, poked her head out on one side of the nest, came out and I thought she was done. She then went back in and spent two days underground rearranging what she previously dug. She came out the other side and appears now like she laid. I’m waiting for her to backfill the burrow and then I’ll go in for the egg hunt.”
After laying the eggs a female will cover up the entrance holes, filling them up with sand. This can also take the whole day or two. Then she may protect the area and the nest, so be careful trying to dig up the eggs. Some females can be aggressive. 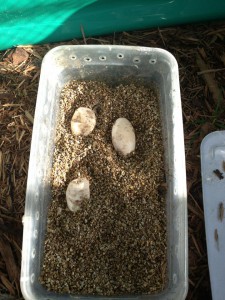 So Manny finally dug up the nest. She made a shallow burrow in front of the egg chamber so she could protect the nest. She laid 3 eggs but only one looks good however they are all going into the incubator.
It is normal for a young female to lay anywhere between 2 – 4 eggs for the first year. As they get older and bigger they will increase the number of eggs they lay with each year till they reach full maturity.

There is always a joy to know that your female cyclura accepted her nesting box and laid her eggs in there.

These photos are curtesy of Manny Hernandes.