Baby Alpha has shown a very impressive progress in his first month of his life. He hatched at 24 grams and today he is 46 grams. He practically doubled his size in one month! It is incredible how well he is gaining weight. Other bigger babies have gained weight as well, but none of them came close to doubling it. This is what he looks like today, a month after he hatched. Please note that we only feed organic greens, vegetables and fruit with dry alfalfa powder supplement occasionally. No other dry or processed foods were given to enhance his weight. 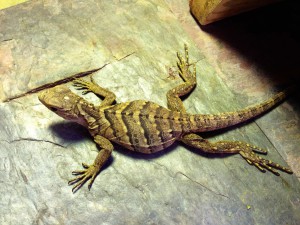 In normal circumstances baby rock iguanas are born with very fat bellies full of nutritional egg yolk which helps them with nourishment for the first two weeks of their life. Baby Alpha must have hatched a bit too early and had not absorbed most of the yolk. He was rather thin. 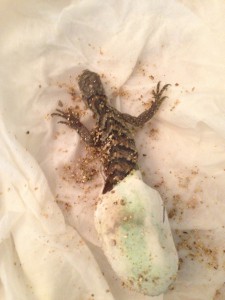 Baby Alpha hatching out of the egg 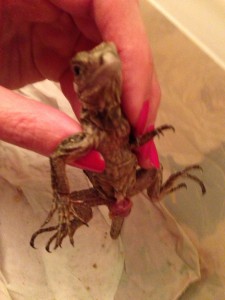 You can see how thin and small he was just a month ago. We were not sure if was going to survive or not due to being so thin. But he started drinking carrot and vegetable juices and water the next day and in couple of days he was eating greens on his own.

I think his rapid weigh gain is contributed exactly to the fact that his survival instincts kicked in right away and he started eating right away, while other “fat” and nourished by yolk babies were slow at starting to eat regular food.

I wouldn’t be surprised if in two or three months he will gain enough weight to catch up with the rest of the babies or even outgrow some of them. Will be interesting to see. Alpha is a very good eater! Check out his page here.