As you know I try to keep my notes as detailed as possible when it comes to observation of my cyclura. It not only helps me to learn about the rock iguanas but also helps you to have as much information about your future pet-cyclura as possible.

Here you can see the photo of the rock iguana eggs a few days before they hatched. This is a 2013 clutch from Casanova and Yasha. 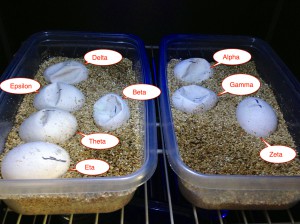 We had named the babies with Greek alphabet letters in the order they hatched. Like Alpha was first, then Beta, Gamma, etc.

And here is the photo of 2-month old babies basking together, taken November 24th, 2013. You can see the difference in patterns, size and colors. 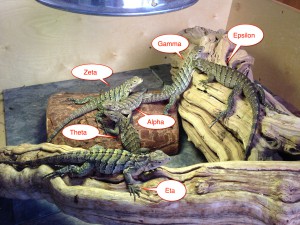 The group photo is missing: baby Delta who was already adopted and living in his new home and baby Beta aka The Superman, who prefers to sit on me rather than with his siblings.

Here is a photo of Beta sitting on me. 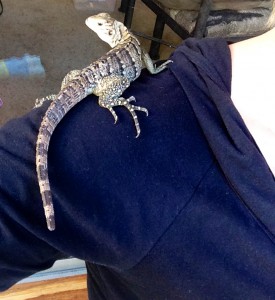