One of our females cyclura lewisi hybrid Bella Blue curls up her tail when she walks through the common territory in the house or sits in the living room. She doesn’t curl it when she basks, sleeps or hangs out with people. Our other females and a male pretty much drag their tails on the ground as they walk. Bella very rarely drags her tail. 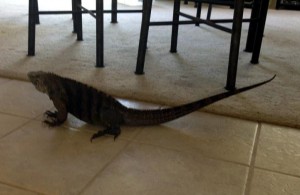 This is not the best photo of this iguana, but it gives you an idea how much she curls her tail up.

What does it mean when your iguana curls her tail?

After observing her for a while and talking to other cyclura owners that had seen this behavior it became clear that this female feels more alert or tense and possibly nervous when she roams the house. We have other cyclura in the house and they all get to roam in the same territory, just not at the same time. Bella Blue probably smells the presence of others and in some areas she can see the cages with other cyclura.  This makes her to be “on guard”.

Hopefully with age she gains more confidence and feels more relaxed in the common area. Or it may just be her personality and she will always behave this way. 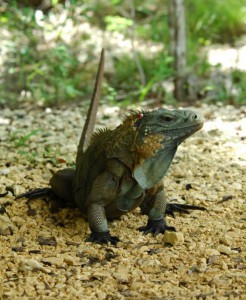 The photo above is a wild blue iguana from Cayman Islands and you can see that it is also exhibiting tail curling.

From other cyclura owners:  Females sometimes to exhibit tail curling when they are approached by a male or another iguana.