This is a very interesting story from Susan Glynn Mule that makes you think about iguana intelligence. Her blue phase green iguana Tazumal is not a Cyclura, but the story is educational and we all can learn something from it. You can learn how to apply some medicine to a damaged snout or learn about intelligent thinking of iguana. 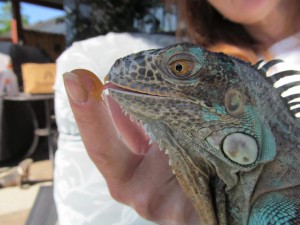 This is what she wrote:

“I wanted to post this photo because the story behind it demonstrates the remarkable intelligence of iguanas of all kinds.

Tazumal, my blue phase green, had injured his nose riding in a small carrier and I was treating it with medical grade honey (this is VERY different from normal raw honey and does not carry botulism).

Tazumal quickly learned that if his nose was bleeding I would apply the honey and he could lick some off of my finger. Soooo, he started scratching the scab off deliberately, knowing I would put honey on it.

It took me a while to figure out this is what he was doing and why his nose wouldn’t heal.

Finally I stopped putting the honey on his nose and just let him lick a taste off of my finger each morning — now his nose is completely healed! This little morning ritual has also helped rebuild trust between Tazumal and me now that his breeding season is over.”