There was a disturbance in the baby cage for the past week. 7 one-month old babies live in the 4ft cage.

Two babies were constantly nagging each other, where one (Gamma) would passionately hiss and bite another baby (Epsilon) and in return Epsilon would spread the aggression on the rest of the babies .

It has effected all of the babies and nobody has gained much weight. Babies were hiding a lot and not eating or basking much.

My first instinct was to separate Epsilon since he was pouncing at everybody and it appeared that Gamma was reacting to Epsilon’s pouncing with hissing. However after observing them for a bit I thought that hissing might have been making other babies (including Epsilon) nervous. So I separated baby Gamma instead of Epsilon into a separate tank (which he seems to enjoy a bit now).

In addition I had divided the baby cage into two sides (see photo below) with two food dishes. 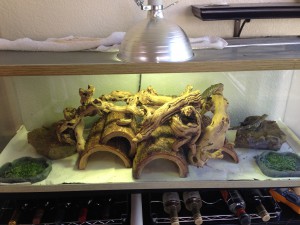 And tad-dah! The Peace had been restored amongst the babies. Everybody is being out and basking and eating without drama. Epsilon has also calmed down and being a good baby.