If you are visiting Puerto Rico and have an access to a boat, try to head towards Isla Magueyes. The island has a good population of cyclura.

It’s  a tiny island off the south coast of Puerto Rico. However you are not allowed to step on the island unless you have a special permit. Isla Magueyes is protected by DNR and has restricted access. But you will most likely see the iguanas that love to bask on the docks. You can pull your boat up to the docks where the iguanas like to to sun bathe and pose for pictures.

Unfortunately, they have been almost trained to come close by so many tourist throwing food to them. But it is still awesome to watch them from the distance.

It’s amazing to see these guys in a large group like this with males side by side. They are peaceful until someone throws something on the dock. Then you see the pecking order.

The area around this dock is mostly non domanant males and there are about 15 or so in this home range. They get along well and they just sit and wait until boats come by to feed them. There are a few females from time to time and an occasional juvinile but hatchlings don’t get closer than about 40 feet or so. The old large males are mostly in the schools main quad area and along the west side of the island.

Iguanas also had been known to swim to the main land,  some locals said that they had seen it happen. 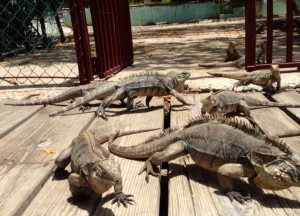