Interesting observation from the Rhino Rock Iguana owners. Even most tame males seem to exhibit strong territorial behavior when it comes to specifically their habitat. Our male Cyclura Lewisi hybrid Casanova (who is Blue Rock Iguana and not Rhino) doesn’t seem to have this behavior. But I have heard from a few male Rhino owners that their iguana pets “like to protect their stuff”. I wanted to share what Peggy Wu said about her male Rhino Iguana Walter. I think her story explains it all. 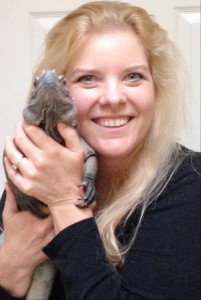 “So funny the way their brains are hard wired. Walter just came out of breeding season, so he started eating (yay) but is now super hab defensive. When he’s not near his hab, he’s my sweet, cuddly momma’s boy. Sunday I got him out of his pup tent & we slept in together. Very snugly. Flopped on my chest, looking at me adoringly, all that. He wanted up (had to poo), he had a nice short soak in warm water since he’s dry & itchy. After that, he was so cute & sweet, exploring the upstairs like normal, but then it was time to go in his hab so I could get his food ready & he could bask. He was on my shoulders, all, “love my mom” style. I leaned into his open hab to shuffle him off of me onto his ramp. He moved slow, not wanted to go, but as soon as he was off me & climbed up on his basking box, he suddenly realized “oh, wait, I’m in my MAN CAVE! YOU, MOMMY, GET OUT!” He went from sweet baby to pissy guy in point 3 seconds. Body tense, dirty look on his face, elbows out, head lowered… sigh. OMG Dude I am NOT going to touch your precious man stuff, geeze! So hard wired. I’m not going to tell him he looks cute when he’s all pissy. That wouldn’t be very nice.  (But he’s so cute!) The good news is, he gives plenty of warnings to get out. Only an idiot would “push it” & get bitten! LOL. P~”